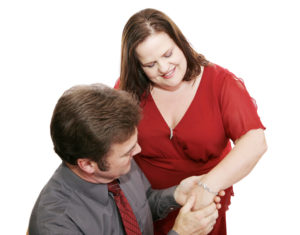 Husband giving a diamond bracelet to his wife for Valentines Day

Valentine’s Day and insurance? I know, I know. The subject may seem a little strange. Stay with me, it will make sense, and there’s a meaningful connection.

Valentine’s Day has a long tradition. There’s a darker side to it but, fortunately, it was substituted by a brighter, happier side that has lasted. Briefly, the dark side involved physical violence among ancient Romans. It was called the feast of Lupercalia and occurred between February 13-15. According to National Public Radio, the occasion was marked by the sacrifice of animals, something that we abhor. To make matters worse, the participants then beat each other with the animals’ hides in a drunken, romantic frenzy. Hardly a showing of integrity, or to our thinking, love. But that was back then.

The term “Valentine” may have come from two men, both named Valentine, who were executed on February 14th in the 3d Century A.D. Their martyrdom was recognized by the Catholic Church by the celebration of St. Valentine’s Day on February 14th. Things slowly got better and in later years, the holiday became a happy one. Chaucer and Shakespeare romanticized it in their work, and it gained popularity throughout Britain, the rest of Europe and ultimately, in the New World. It became a day, not of violence, but quite the opposite—expressions of love and trust.

According to Forbes, the 2017 jewelry market is expected to reach $257 Billion. Of that, according to Statisticbrain.com, about 17% will be purchased for Valentine’s Day (nearly $44 Billion). That’s a lot of value on fingers, around necks and wrists, in ears, and left in houses, apartments, hotels, and cars. (Remember Kim Kardashian and the Paris jewelry heist robbing her of millions in baubles?)

Where Does Insurance Come In?

Insurance does and should come in from the start. It should be the next consideration after deciding who you’ll buy the jewelry for and what to buy.

Not just because you are making a substantial investment of money, but because the investment symbolizes the bond between you and person that you are giving it to. The bond includes the characteristics of honesty and sincerity, all synonymous with integrity. This isn’t so just because many people get engaged on Valentines Day (a few years ago American Express estimated that number as about six million). It’s also because the celebration of Valentine’s Day is a historical tradition of romantic relationships. Therefore, as the traditon needs to be preserved, so does the symbol. That’s where insurance comes in.

Homeowner’s insurance can insure the structure of your home, your personal property like jewelry (including the engagement ring), protect you from liability to others, or some or all of those depending on the policy that you buy. Tenant’s insurance (a very rough equivalent of homeowner’s insurance) can insure your property and protect you from liability to others. What’s more, the protection of your property can extend to your property, like Valentines’ jewelry, when taken on a short trip to celebrate the romantic day.

Standard homeowners and renters insurance policies ususlly include some coverage for jewelry and other valuables, but the standard coverage has limits; for jewelry the standard limits are sometimes low. The kinds of risks for which coverage is provided depends on the “form” of policy that you buy. A “form” is the written insurance contract itself which can be different depending upon the insurance company involved; there can also be different forms within the same insurance company. That is, some “forms” may cover all risks (i.e. fire, windstorm, theft, and vandalism), while some may not. It is important to discuss your needs and the type of property that you have with your insurance agent.

If you have received valuable jewelry or items that are hard to replace, standard coverage limits can be increased. This can be done by increasing the overall limits of the homeowner’s insurance policy (and thereby increasing the overall contents coverage). Although this is the less costly way, the amount recoverable for a single item will still be limited. The other way is to “schedule” the item(s) on a floater. Doing so will allow you to insure the item(s) for their value. This is the more expensive alternative because the additional premium will be based upon the stated value of the property, such as an engagement ring. Your insurance company will require proof of the actual value of the item by means of an appraisal from a qualified appraiser. Scheduling the jewelry or any other valuable item may also provide coverage for loss or damage from a greater number of causes of loss (risks).

So, do you see the connection with Valentine’s Day and insurance? As you buy that bauble for your love, consider protecting it, too, with insurance.