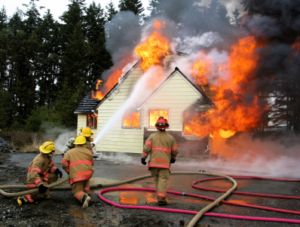 Friendly fires, hostile fires and insurance? Yes, it’s a strange title, I know. But in the property insurance world, fires are moody: Friendly and Hostile.

When thinking about insurance, it is hard to imagine anything good, much less friendly, about a fire. At its worst, fire can cause the destruction of a home and all of the material things that you have worked for. At the least, it can cause smoke damage, water damage (from the extinguishment of the fire), and lots of other inconveniences.

But there is another way to think about fires and their insurance implications that you may not know about. It relates to the distinction between friendly and hostile fires.

A friendly fire is one that exists, even if intentionally set, in a place where it belongs. An example is a fire in a fireplace or in an industrial boiler. In the course of burning a fire in a fireplace during the winter, it would not be unusual for there to occur soot damage on the wall or ceiling adjacent to the fireplace. Despite the harm to the property from the fire that is contained in the fireplace, a homeowners insurance policy would not pay for the cleaning, resurfacing, or repainting of the wall or ceiling. That’s because the accumulation of soot, for example, is analogous to a maintenance issue and furthermore, it is to be expected from the fireplace fire.

For history (and maybe legal) buffs, the concept of friendly fire has its origin in an old English legal decision, Austin v. Drew. There, an employee of a sugar manufacturer did not open the register on the top of a chimney resulting in the build-up of heat, smoke, and sparks throughout the factory. People died, and property was destroyed. In the Austin case, the court held that there was no insurance coverage because the fire and its results were contained to where they should be—in the factory. There would likely be a similar result in the fireplace situation and resulting soot. Although a homeowner’s insurance policy might not use the term “friendly fire,” the concept makes pretty simple sense: without it, fire insurance would just be all-inclusive accident protection for everyday home activities. That’s not what homeowners insurance is intended for. Insurance is meant to assume the financial risk of fortuitous (unexpected or unplanned) events.

In contrast to friendly fires are hostile fires. Hostile fires are those that happen where fires are not intended, expected or wanted. Furthermore, according to the International Risk Management Institute, a fire can be classified as “hostile” if, although ignited in a location where fires are intended to be (such as the controlled burn of brush), it spreads to adjoining property. It can also be hostile if it becomes hotter and bigger than intended and cannot be extinguished in a typical way . Therefore, an initially friendly fire can become a hostile fire.